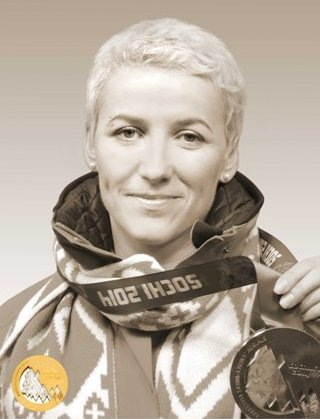 Honored Master of Sport of Belarus

The Olympic champion was born in the Ukrainian city of Rovno. Since childhood she practised gymnastics but at the age of 13 coaches from the city of Nikolaev invited her to try aerial skiing and Alla agreed. In 1992, she entered the School of Physical Education in Nikolaev. Although she was new to skiing, she started scoring wins at junior world championships.

Alla Tsuper made her first Olympic appearance in Nagano, Japan in 1998 as a member of the Ukrainian national team. An injury deprived her of the chance to win a medal. Nevertheless, the fifth finish was a good result for the young athlete. Tsuper believes that if she had become an Olympic medalist at the age of 18, she would probably have had no further desire to move on.

After the Olympics in Nagano, Alla Tsuper and several other athletes from the Ukrainian national team were invited to move to Belarus and train here. The athlete did not hesitate long and agreed. They first trained at the freestyle skiing school in Gomel. Then Alla Tsuper moved to Minsk in 2001 where she continued to train with Mikalai Kazeka.

Alla Tsuper took part in six Winter Olympics in a row. She came to Salt Lake City in 2002 as a decorated athlete. She won the Small Crystal Globe that year but she failed to win an Olympic medal because of a fall at the most crucial moment. Alla Tsuper had knee problems at the next two Olympic Games in Turin in 2006 and Vancouver in 2010 so she again could not count on a medal result. After the Vancouver Games, she retired from sport, got married and had a baby. However, nine months after the birth of her daughter Alla Tsuper resumed training. Back into proper shape Tsuper decided to have another go at the Olympics. In Sochi she  executed back full-full-full (three backflips with three twists) and landed the well-deserved gold medal. After the 2014 Sochi Olympics, Alla Tsuper announced her retirement from sport but later she returned and competed actively in the 2017/2018 Olympic season.

At the general meeting of Belarusian Olympians she was elected flag bearer of Team Belarus at the opening ceremony of the Winter Olympic Games in Pyeongchang in 2018.

In South Korea she successfully qualified for the final with 99.37 points. In the super final Alla Tsuper entered the most difficult jump to perform among the participants but did not pull it off and finished one step away from the podium in fourth place with 59.94 points.