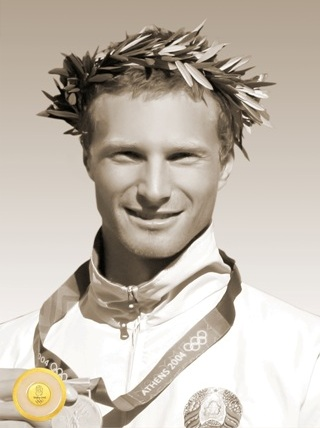 Holder of the Order of the Fatherland, II class (2010)

Holder of the Order of the Fatherland, III class (2008)

Honored Master of Sports of the Republic of Belarus.

Vadzim Makhneu was born in Minsk in a family of athletes. His father Gennady competed in the K4 1,000m event at the 1980 Olympic Games in Moscow. His mother Larisa was a canoeist too and won a bronze medal at the European Championships. She also took part in the USSR Championships in May 1979.

The first coach of the future Olympic champion was his father. At first, Vadzim Makhneu did not show outstanding results. To qualify for the Minsk championship, it was necessary to become the best at his training facility, but Vadzim Makhneu constantly lost to rivals in the junior team. Success came after he entered the Olympic reserve school.

Vadzim Makhneu scored his first victory in the 1,000m event at the 1999 Belarusian Championships. By the next summer, he had already had seven victories. A year later, in 2001, he became two-time bronze medalist in the K4 500m and K4 1,000m events at the European Championships in Milan. In just over a 20-year career, Vadzim Makhneu rose to the medal podium of the European Championships 22 times (10 golds, 6 silvers, and 6 bronzes) and 16 times to the podium of the world championships (7-5-4). His first and last awards at these events were separated by a 13-year gap.

The first Olympic medal in Vadzim Makhneu’s career was a bronze at the Olympic Games in Athens, where he performed with Raman Piatrushenka in the K2 500m event. Fearing a false start, Vadzim Makhneu missed a few strokes, which may have cost them a silver medal. The canoeists were satisfied with the result.

The Summer Olympic Games in Beijing turned out to be triumphant for Vadzim Makhneu. The Belarusian team arrived in the Chinese capital as the leader of the season. In the K4 1,000m event, Vadzim Makhneu, Aliaksei Abalmasau, Raman Piatrushenka, and Artur Litvinchuk left behind the Slovakian and German teams and won the first gold in canoe sprint in the history of sovereign Belarus.

The day after the triumph, Vadzim Makhneu and Raman Piatrushenka competed in the 500m event. The desire to take the leadership from the German duo of Rauhe-Wieskotter was great, but the Belarusian athletes already lacked physical capabilities for this. As a result, they added a bronze medal in the K2 500m event to the gold medal in the K4 event.

At the Olympic Games in London, the Makhneu and Piatrushenka obtained a missing silver to Belarus’ tally of Olympic awards. In the 200m event they lost to the Russian duo Dyachenko-Postrigay.

After calling time on his sport career, Vadzim Makhneu became a coach of the Belarusian junior canoe team.