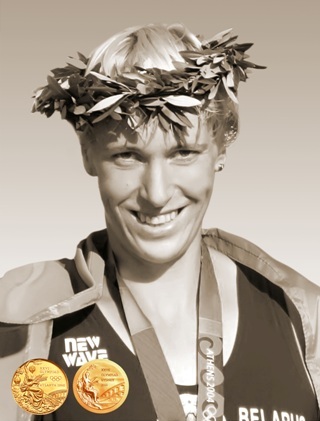 Ekaterina Karsten (maiden name Khodotovich) was born on 2 June 1972 in the village of Osecheno, Krupki District, Minsk Region. In 1987, the school she attended received a letter saying that the Sport Boarding School in Minsk was looking for tall, sporty girls. A little bit later rowing and athletics coaches visited the school. They were impressed by Ekaterina, a tall and athletic girl. The experienced coach Anatoly Kvyatkovsky persuaded her to take up rowing.

At first Ekaterina did not do well in single sculls and coaches put her in an eight. But soon Ekaterina returned to singles. Already in 1990, three years after she started rowing, she won the world junior champion title. A year later she picked up the bronze medal in double sculls at the world championships.

At the Summer Olympic Games in Barcelona in 1992, Ekaterina won a bronze medal in quad sculls. At the next Summer Olympic Games in Atlanta in 1996, she competed in single sculls. Bronze medalist of the 1992 Barcelona Olympic Games, the leader of the season, Canadian Silken Laumann was considered an odds-on favorite. In the semifinals, the Belarusian outsmarted the Canadian imitating fatigue on the advice of her coach and making a strong dash at the finish. Such tactics helped Karsten to win a gold medal, which was a first for the independent Belarus.

Since 1996 the Belarusian athlete earned pedestal finishes in every top tournament. The only exception was 1998, the year she took a break from sport to give birth to her daughter. When back in sport, Karsten reaffirmed her reputation having won gold medals at the World Championships in 1999, and then at the Summer Olympic Games in 2000 in Sydney.

After the Olympic Games in Sydney Ekaterina Karsten was one of the top names in rowing and a favorite at any tournament. However, she failed to make it Olympic golden treble. At the Summer Olympic Games in Athens in 2004 Ekaterina came in second losing to Katrin Rutschow of Germany.

From 2005 Ekaterina Karsten won the World Championships for the three consecutive seasons. At the Summer Olympic Games in Beijing the Belarusian athlete added bronze to her medal count.

Unfortunately, Ekaterina Karsten didn’t medal at her sixth and seventh Olympic Games in London in 2012 and in Rio de Janeiro in 2016. Yet, the athlete did not quit sport and continued her career.

In May 2017, she won a silver medal at the European Championships and said that she had her eyes on Tokyo. In 2018 she celebrated her 46th birthday and continued competing in different top competitions.

Ekaterina Karsten called time on her sport career on 29 August 2019.