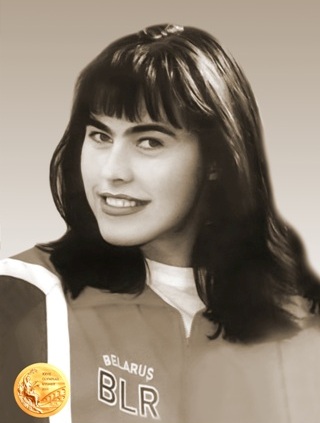 Since the early childhood Janina got used to farm labour because she had to help her parents in everything. Her life itself made her to be connected to sport. She needed to go about four km every day to get to school situated in other village. She was keen on Table Tennis and Running. During one of the region’s competitions she was noticed by Mr. Grigoriy Sinicyn - a coach from Grodno. He invited an eighth-form girl to the College for Olympic Reserve in Grodno.

Grigoriy Sinicyn was outstanding specialist in throwing. That is why he didn’t begin to develop Janina’s running skills. He drew girl’s attention to discus and shot. The results were not perfect at the begging and coach decided not to hurry up. Painstaking work had started. After a certain period of time Janina turned out to be one of the most distinguished pupils in her group. She became to perform successfully at region and republican competitions.

She got 2 Bronze Medals at the Youth Championship in Finland (Discus and Shot Put). Then she graduated from the College for Olympic Reserve and moved to Minsk. Mechislav Ovsyannikov became her new coach.

Competitions in Budapest were a real chance for Janina to show her skills. And she managed to use it. She got the third prize. After the Championship girl from Belarus amazed not only the National Team but also the rivals.

Unfortunately, her coach Mechislav Ovsyannikov died in the prime of life.

The athlete had to change coaches. As a result she came to Australia later than other athletes – on October, 13. It was hard to guess that she went to win gold medal.

The qualification began in the cold morning. First Yanina’s attempt was great – 19.36 m. It was the best result. But she understood that it wasn’t enough for winning and put the shot to 19.43 m.

Kumbernus (19.38) and Peleshko (19.6) were her rivals. They were really happy when the second and the third Yanina’s shot puts were pretty feeble. But the results of her opponents impressed everyone: Kumbernus - 19.24 and Peleshko – 19.92! Their other tries were as great as the first one.

So, Yanina collected all her strengths and made the final put. The result was 20.56! Unbelievable!

She broke the 17 year record of Belarus! She got the gold.