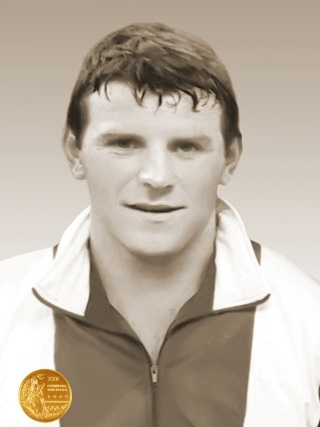 Mikhail Iakimovitch enrolled at a handball section of secondary school No.5 in Slutsk in 1978. Before that, he had a go at sprint, shot put, and also played football in the courtyard like all boys. Mikhail never missed handball training sessions, but if it was possible to do less, for example, 18 exercises instead of 20, he aways used that opportunity. That, however, did not prevent him from becoming one of the world’s greatest handball players.

The future Olympic champion came to Minsk thanks to his first coach David Reznikov who wrote a letter to the appropriate authorities and arranged for his relocation to Minsk taking advantage of the regional quota for employment and education.

Mikhail Iakimovitch came into the spotlight at the age of 20 at an international tournament in Leningrad. Then, the main left wingman in HC SKA was Eduard Skorov. In one of the games, Skorov had to be substituted and Mikhail got a chance to show his best and started to score one goal after another. After that match, Mikhail always made the starting lineup.

Very soon, Mikhail Iakimovitch was ranked among top scorers of the USSR championship and became a  leader not only of HC SKA Minsk but also of the USSR national team.

At the 1990 World Men’s Handball Championship, Mikhail Iakimovitch won his first trophy as part of the national team. The USSR team reached the final only to lose to another great team of those times, their arch rival Sweden. After that failure many players had to part ways with the national team. In the run-up to Olympic Games in Barcelona, the national team lost to Germany in a friendly. The unexpected loss spelled the end for several first team players, including Tyumentsev, Atavin, and Nesterov.

The team was renewed before the Barcelona Games to include athletes from mainly second and third lineups of the national team. It seemed that the national team would not achieve any success. Although no one set a goal to become Olympic champions in that situation. The players understood however that they were playing together for the last time then and that such a team (CIS) would no longer exist. Before the Games in Barcelona, Mikhail fell and injured his collarbone. He risked missing the Olympics, but the doctors managed to save the joint.

The opening match at the Olympics against Germany was decisive for the team. The Unified Team played much better, and the final whistle recorded a 10-goal advantage of the national team over Germany! The hardest match in Barcelona was the semifinal against Iceland. All previous matches against that team were a piece of cake for the Soviet handball players. But the match at the Olympic Games turned out to be very challenging. Still the CIS team prevailed 23-19, with Mikhail scoring half of the team's goals. In the final the CIS defeated Sweden 22-20. It was very gratifying to settle score with them after the loss at the 1990 World Men’s Championship.

After the USSR collapse, Mikhail Iakimovitch received citizenship offers from two countries: Russia and Spain. Mikhail decided to play for his native Belarus in the qualifying match against Croatia, thereby making his final choice, which he has never regretted. Playing in Spain, the player has made a club career, winning the championship and the Super Cup, as well as the EHF European Cup, the EHF Cup and the EHF Cup Winners' Cup.

At the 1995 World Men’s Handball Championship, the Belarusian national handball team lost to Egypt in the last match of the group stage. Bad luck played its role then. On the last minute of the match Iakimovitch failed to score a penalty, Aleksandr Tuchkin hit the post, and Andrei Klimovets also missed a chance to score. At that time, the Belarusian national team could do with a draw, which would secure them advancement from the third place and the opportunity to face Romania. Unfortunately, the team faced Germany and lost. Later, Belarus routed Romania in the match for 9-16 places.

Despite injuries, Mikhail Iakimovitch remained the team’s leading leader all the way till his retirement. Goalkeepers could find no answer to his strong throw (the speed of the ball reached 125km/h, one of the world’s best performances). It was a shoulder injury, however, that forced Mikhail Iakimovitch to call time on his sporting career. In 2003, playing for Spain’s San Antonio, the athlete felt discomfort in his shoulder. He started considering his retirement to have a surgery. The coach of the Spanish team persuaded him to play one more year. The decision turned to be a mistake, however, as Mikhail could not help the team reach any good result.

As soon as he retired, Mikhail Iakimovitch was offered to try his hand at coaching. Mikhail's Spanish teammate and friend ended his playing career at about the same time as Iakimovitch and almost immediately took charge of the top division club Caja Cantabria from Santander. He also offered his friend the post of a coach assistant. Mikhail refused, although the club (named Teka then) was well-known to the handball player.

When the crisis erupted, he returned to Belarus. Today he lives in Borisov, running his business.