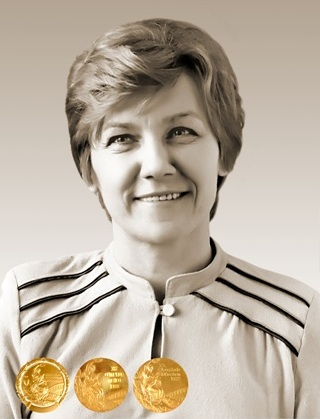 Honored Worker of Physical Education and Sport of BSSR

Tatyana had a difficult childhood. She did not remember her farther Dmitry Petrenko, the Hero of the Soviet Union who was killed in the Winter War. Her mother worked at the People's Commissariat for Internal Affairs in Minsk and was evacuated on the first day of the Great Patriotic War. Three-year-old Tatyana and her six-year-old sister Lilia were left with their grandmother in Ostroshitsky Gorodok. The mother reunited with her daughters after the war.

Once, friends persuaded the two sisters to come check out a local fencing club. That was when Tatyana learned about fencing. Her coaches were fencing experts Larisa and German Bokun. German Bokun already was a renowned athlete and coach in the country, but he could not even imagine that Tatyana would soon become his best student. They first met when he returned from the 1952 Olympic Games in Helsinki. Tatyana never forgot their first encounter. He entered the room, walked to his wife, pointed at Tatyana and asked: “Who have you admitted? Who is this small and fragile creature? She won’t even lift a foil.”

In 1954, Tatyana won the USSR junior championships. After that, she decided to quit fencing in favor of skating that she adored. Tatyana trained for three years but achieved no result and was convinced by German Bokun to go back to fencing. Soon after, in 1959, she won her first medal of the world championships – a bronze medal in Budapest. From that moment, she never left fencing. The Olympic Games were followed by world championships and numerous international tournaments. Tatyana Samusenko would often start the team events to set the tone right and anchor them to seal the outcome in favor of the national team. The whole fencing world was in awe of Soviet fencers. Tatyana Samusenko’s teammates were Alexandra Zabelina, Galina Gorokhova, Valentina Rastvorova and Yelena Belova.

Tatyana Samusenko was a member of the national team of the Soviet Union for 14 years. At the age of 34, she decided to quit sport. She worked as a children's coach and then a head of a sports school.

By that time fencing went in decline, unfortunately, and Tatyana Samusenko was looking for ways to revive her favorite sport. In 1994, she set up the Belarusian national fencing club Golden Blade. A year later, she initiated the first German Bokun international tournament in Minsk.

Tatyana Samusenko passed away on 21 January 2000.