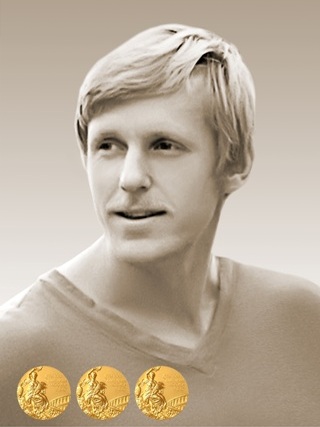 Order of the Red Banner of Labor

Order of Friendship of Peoples

As a child, Vladimir Parfenovich dreamed of becoming a successful wrestler. He trained hard for three years. Once he got sick and had to miss practices. He did not return to the wrestling school as because he was afraid he would be scolded for skipping class. However, Vladimir was very much into sport, so he decided to take up canoeing since he lived near Komsomolskoye Lake.

His first attempt to join a canoe club in May 1973 was unsuccessful. The club’s coach did not recognize his potential. However, Vladimir did not give up and finally was admitted in February. During one of the first training sessions, the newbie kayaker poorly tied the floats to the kayak and capsized. This happened in shallow water, so he did not get into serious trouble.

Vladimir Parfenovich had the taste of victory at his first competitions – the youth sports championships. The coach entered Vladimir in the event for athletes who were a year older. This did not frighten Parfenovich, and, to everyone's surprise and the coach’s delight, he won. After that, he tried to be the best at all competitions. He joined the team of the Soviet Union at the age of 18, in 1977.

At the 1976 Olympic Games in Montreal, Soviet kayakers and canoeists won seven medals, six of which were golds. That was how good Team USSR was.

Athletes had to meet very high standards. However, there was no one on the team who performed well in individual events. Eventually, the coaches made their bet on young Vladimir Parfenovich. The athlete clinched two victories at international competitions, making a name for himself. Later he said that he had been extremely nervous ahead of every race.

During the next year, Vladimir Parfenovich lost only once, at the World Championships. After that, he never let anyone beat him in an individual event again.

The year 1979 marked a new stage for Vladimir. In the spring, Vladimir Tainikov, the partner of Olympic champion Sergei Chukhray, fell ill. The coaches decided to pair the experienced athlete with a younger one, namely Vladimir Parfenovich.

At first, the team participated in the 1,000m event and won. After that, they also started competing in 500m events. They were victorious in the 500m at the World Championships, setting the record that was broken only 12 years later, with the emergence of upgraded kayaks and oars.

Vladimir Parfenovich did not have to worry about qualifying for the Olympic Games in Moscow, for he was the best in the Soviet Union. He left everyone behind in individual events. Until 1983, he was victorious in all events he took part in, including qualifying ones.

His first event at the Olympic Games in Moscow brought him his first Olympic gold medal. The next event, K-2, was to take place in just one hour and twenty minutes. In between the events, the athlete was busy accepting congratulations, undergoing doping control, and attending the medal ceremony. After all that, there was less than half an hour left before the next event. Sergei Chukhray was nervous, urging his teammate to hurry up. However, Vladimir Parfenovich was relaxed and sure of a win. The 1,000m event was more challenging. Sergei Chukhray almost lost it 150 meters before the finish, but then he calmed down and the team raced forward so fast that people thought that Sergei was about to fall out of the kayak.

Vladimir later said: “At those Olympic Games, we won the last medal for the Soviet team, the milestone 80th. I am grateful to Sergei Chukhray, an excellent kayaker, for the lessons he taught me.”

After retiring from sport, Parfenovich went into politics, headed the Belarusian kayak and canoe federation, and worked as a coach.