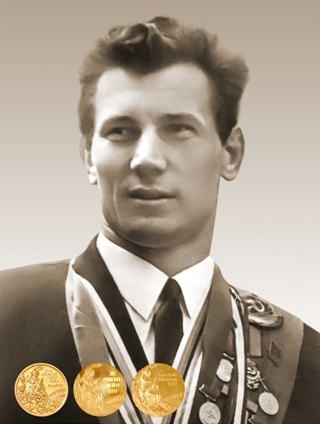 Honored coach of BSSR and USSR

Golden Order and Golden Branch of the International Federation of Associated Wrestling Styles which named him best freestyle wrestler of the ХХth century.

State Prize of the Republic of Belarus in Physical Culture and Sports.

Aleksandr Medved was born on 16 September 1937 in Belaya Tserkov, Ukraine. The father of the future champion, Vasily, worked as a forester, and their house was located in the forest. Aleksandr took after his father in height. On the one hand, his peers envied him, but on the other hand, it caused a lot of troubles. Aleksandr enrolled in the gymnastics club, but soon realized that he could not be a gymnast with such a height: while training, he had to lift the bar high so that his legs did not touch the floor. However, Aleksandr was not discouraged by the failure. There were other sports clubs but in order to attend them, he needed his father’s permission. Aleksandr’s father set tough terms: to chop 1-2m3 of oak wood ahead of every training session.

At the time the young man did not even realize what a big advantage this "homework" would become for him in his future sports career. Later, experts were amazed at the strength of his wrists and amazing muscle elasticity.

Aleksandr Medved was enlisted in the tank unit of the Belorussian Military District in Uruchye. No one could imagine that he would stay in Belarus forever and would soon become an Olympic champion.

However, Aleksandr Medved’s sports career began with handball, not with wrestling. After that he tried his hand in athletics. He was shown how to throw an object, and at the very first competitions he threw a hammer beyond the mark of the second sports category. However, wresting turned out to be his real cup of tea. He didn’t care with whom to compete: with renowned Greco-Roman wrestlers Anatoly Zelenko and Sergey Zalussky or with a freestyle wrestler, winner of the USSR Championship Nikolay Aksyonov.

During his training, the future Olympic champion showed an amazing ability to learn anything new and momentarily master techniques. He would perfect them in the course of training and find unexpected counter moves. This made it obvious that he was an outstanding athlete, which soon was noticed by famous coaches Pavel Grigoriev and Boleslav Rybalko who took the young wrestler under their wings.

At the age of 20, Aleksandr Medved won the sambo and freestyle wrestling competitions and ranked third in the Greco-Roman wrestling event at the Belorussian Military District Championships. At the beginning of his brilliant sports career, he stood out thanks to his readiness to take on any rival, unshakable self-belief, and ability to endure pain.

Aleksandr Medved’s moment of glory came in October 1964, at the Tokyo Olympic Games. Just in two minutes he flipped his opponent, Romania’s athlete Balo, and in the final he wrestled down Bulgaria’s Vylko Kostola just in 39 seconds.

In 1968, the Olympic wrestling tournament was to be held in the highlands of Mexico, little known for Europeans. Mexico City met athletes with searing heat. Aleksandr Medved, having participated in the most prestigious wrestling tournaments, knew that even one moment of slackness can lead to a defeat that would torment him for the rest of his life. That was why he went to every bout as if it was his last.

In the final, two Olympic champions of the previous years came face to face – Wilfried Dietrich and Aleksandr Medved. Aleksandr Medved felt that Wilfried Dietrich started to give in. However, during the bout, Dietrich dislocated Medved’s thumb. The judge stopped the fight and suggested that Medved should ask for a doctor, but Aleksandr popped his sprained finger back into the joint himself and chose to continue the fight. Dietrich was shocked. And although the Belarusian athlete no longer had the strength to beat his opponent, his total points still secured him the title of an Olympic champion. The second one in a row! After the bout, upset Wilfried Dietrich approached Aleksandr Medved, hugged him, and said through an interpreter: “While you perform, the rest have nothing to do on the mat...”.

Four years later, at the Olympic Games in Munich, Aleksandr Medved saw the familiar surname Dietrich on the list of the wrestling tournament participants in the heavyweight division. But he was more bothered about U.S. Christopher J. Taylor. The journalists said that he was putting on weight on purpose. Indeed, while the weight of the Belarusian athlete was 110kg, his U.S. opponent weighted almost 200kg.

He won the fight against Dietrich surprisingly easily, but the semifinal bout between two-time Olympic champion Aleksandr Medved and Chris Taylor caused great excitement. When the U.S. athlete stepped on the mat, the audience was amazed at his strength. The hulking American was struggling to grab his opponent while Aleksandr Medved was circling in the center of the mat, preparing to deliver the decisive blow. He did a fast sweep, and Taylor, as if in slow motion, started to fall on his back. Then he crashed down on the floor and it was over. Having clinched his third Olympic medal, Aleksandr Medved kissed a mat salty from sweat. He has remained in the memory of the fans as the Great and Invincible forever.

Since 1964, Aleksandr did not miss a single Summer Olympics. At first he participated as an athlete, then as a judge and a coach, and later as a vice president of the National Olympic Committee. He held that position for more than twenty years.

In 1972, Aleksandr Medved carried the USSR flag at the opening ceremony of the Olympic Games in Munich, in 1980 he recited the Olympic Oath on behalf of the judges in Moscow and lit the Olympic Flame at Dinamo Stadium in Minsk. He carried the national flag of the Republic of Belarus at the 1996 Olympics in Atlanta and the 2004 Olympics in Athens.

After retiring from sport, Aleksandr Medved headed the sports chair of the Belarusian State University of Informatics and Radioelectronics and published more than sixty scientific, methodological and academic works and two books.

The international tournament for the prizes of Aleksandr Medved has been held in Belarus annually since 1970.