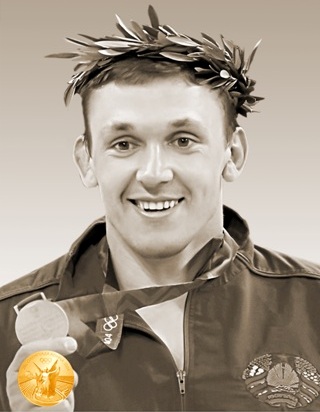 Honored Master of Sports of the Republic of Belarus

Master of Sports of International Class

Ihar Makarau was born on 20 July 1979 in the city of Kimry, Tver Region. The family of the future Olympic champion moved to the Republic of Belarus in 1987, when his father, a geophysicist, was transferred to the Seismotekhnika plant in Gomel. Together with his elder brother Ihar began to practice judo in one of the sports clubs of the city. The first success came to the young athlete in the 7th grade when he won the junior championship of Belarus.

The 19-year-old Ihar was invited to the national team in 1998 after he won a silver medal at the European Youth Championships. He later became the world champion among students and a bronze medalist at the Universiade.

The pre-Olympic year of 2003 was successful for Ihar Makarau. This year he became the bronze medalist of the European Championships and the World Cup in the half-heavyweight (100 kg) event. The bronze medals of these competitions paved him the way to the 2004 Summer Olympic Games that took place in the homeland of the Olympic movement - in Athens, Greece. In the run-up to the Games judo experts said that almost all of the 32 competitors could claim the victory in this event. In order to win the gold, Ihar Makarau had to defeat not only such powerful and experienced rivals as Iveri Jikurauli from Georgia and Elko van der Geest from the Netherlands, but also his good friend Askhat Zhitkeyev from Kazakhstan. It was Askhat who gave Makarau advise on how to act against the Korean judoka Jang Sung-Ho with whom the Belarusian athlete had never met before. As a result, 14 seconds before the expiration of the main time, Ihar Makarau managed to catch the enemy at his favorite trick - the “side overturn” in the final.

For seventeen years, the Gomel athlete had dreamed of Olympic gold and was crowned with a medal and an olive branch precisely in the homeland of the first Olympic Games 108 years after their revival.

Ihar Makarau also took part in the 2012 Summer Olympic Games, which took place in London, however, this time in the weight category +100 kg. The Belarusian athlete reached the quarterfinals, where he lost to Kim Sung Min from the Republic of Korea, then defeated Cuban Oscar Bryson, but lost to the two-time world champion Andreas Tölzer from Germany in the fight for the third place. As a result, Ihar Makarau took the fifth place.

After the Games in London, the Olympic champion announced that he was resigning as a professional athlete. And at the end of 2014, the athlete opened his own judo school in Gomel, where he trains children.