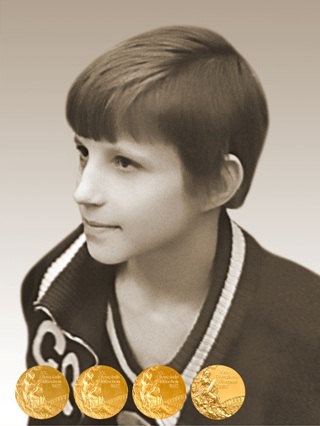 Order of Friendship of Peoples

Absolute champion of the USSR, 1975

Olga Korbut was born on 16 May 1955 in Grodno, the youngest of four sisters. In 1962, the future Olympic champion took up gymnastics. Six months into the training, she was dismissed by her coaches as unpromising. Nevertheless, the young athlete was sent to represent her sports school at the city's gymnastics tournament. There, she caught the eye of celebrated Olympic champion and coach Elena Volchetskaya. After a year of training, she introduced Olga Korbut to USSR Honored Coach Renald Knysh, who helped the athlete win the Olympic gold.

Renald Knysh was an innovative coach who invented more than 30 unique elements, including the famous “Korbut flip”, a gymnastic element that has become a trademark of the Belarusian athlete.

Olga Korbut showed her brand-new backflip-to-catch on the uneven bars at the national championships in 1969. In 1970, the 15-year-old gymnast performed at the USSR Artistic Gymnastics Championships, after which she became widely known as a “prodigy from Grodno”. At those competitions, Olga Korbut won the USSR champion title in the vault.

In the 1970s the USSR national gymnastics team was going though a change of generations, with two athletes vying for each of six roster spots. The team that represented the USSR at the Summer Olympic Games in Munich in 1972 included Lyubov Burda, Olga Korbut, Antonina Koshel, Elvira Saadi, Lyudmila Turishcheva and Tamara Lazakovich. Olga Korbut introduced her innovative gymnastic elements to become a favorite at the Munich Games. However, she made a serious mistake performing on the uneven bars and lost to Lyudmila Turisheva in the all-around. Olga Korbut still managed to bring home three Olympic gold medals (team, balance beam, floor) and one silver (uneven bars). The ease with which the athlete performed the most complex elements won the hearts of many fans.

In 1973, the USSR national gymnastics team went on a twenty-day tour around the United States, during which Olga Korbut and her coach met with President Richard Nixon.

The athlete dominated all the competitions she took part in over the following years. In 1974-1975, she secured a number of confident wins at the world and USSR championships and qualified to represent the USSR at the next Olympics.

At the Olympic Games in Montreal in 1976, Olga Korbut, despite having an ankle injury, collected the team gold and the balance team silver.

Soon after the Olympics, Olga Korbut graduated from the Grodno Pedagogical Institute (history major). Olga Korbut bid farewell to sport at the international competitions in Moscow in the spring of 1978.

In the late 1980s, together with her family Olga Korbut left for the United States where she currently resides and continues working.