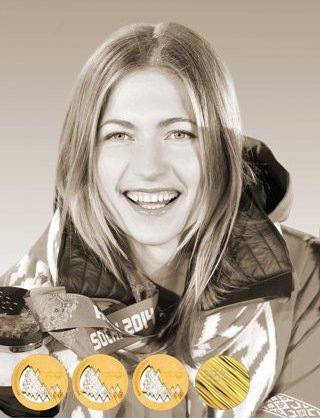 Order of the Fatherland 3rd Class

Darya Domracheva was born in Minsk in 1986 to the family of architects. When she was four the family moved to Nyagan, a small town in Siberia where she lived for the next 15 years. She took up dancing and basketball at first and in 1992, following in the footsteps of her elder brother, enrolled in the cross-country skiing school. She joined the newly opened Nyagan Biathlon School in 1999. Albert Musin was her first biathlon coach.

At first Darya Domracheva competed for the Russian national team. In 2004 she took up an offer from the senior coach of the Belarusian women's team and joined Team Belarus.

The first time she performed for Belarus internationally was at the IBU Youth and Junior World Championships in Kontiolahti in 2005 where she won the Sprint and the Pursuit but finished 40th in the Individual race. The athlete made her World Cup debut in Ostersund in 2006 and placed 16th in the Sprint (second-best result among five Belarusian athletes). She came in second in the Sprint and in the Pursuit at the IBU Biathlon Junior World Championships in Martell, Italy in 2007.

In the 2008/2009 season Darya Domracheva continuously placed in the top ten. At the 2009 World Championships she set a record for winning back 48 positions in the women’s Pursuit and almost made it to the podium. A year later, she was leading in the Mass Start in Oberhof but cross-fired at the third firing range. For that she received four penalty laps and thus lost her chance at the podium.

In the 2010/2011 season Darya won two medals at the World Championships in Khanty-Mansiysk: silver in the Mass Start and bronze in the Relay. She ranked sixth in the 2010-2011 overall standings. In 2010, the 23-year-old athlete won her first Olympic medal: bronze the 15km Individual race in Vancouver.

The 2011/12 season was one of the best in Darya Domracheva's career. In the World Cup, she came to rival the world’s leader Magdalena Neuner of Germany. Neuner announced that she would retire after the 2011/2012 season and sought to win all disciplines but the intrigue as to who would bag the Big Crystal Globe remained until the end of the season. Neuner's advantage in speed was leveled by that of Domracheva’s. Domracheva became much more stable in shooting. She earned a string of podium finishes that season. For the first time in her career she clinched the world champion title having won the Pursuit in Ruhpolding. Darya Domracheva finished the season second in the World Cup overall standings 28 points behind Neuner. She won two Small Crystal Globes (Pursuit and Mass Start), ranked second in the sprint standings and third in individual races.

The 2013/2014 season was a truly triumphant season for Darya Domracheva. She won her first Olympic gold on 11 February 2014 in the 10km Pursuit race at the 2014 Olympic Games in Sochi. Despite ninth finish in the Sprint, she took an early lead in the Pursuit after clear second shoot and built on this advantage during the race. Only on the last, fourth shooting, leading by more than 40 seconds, she missed the last 20th target, but still came home more than 37 seconds ahead of the  second-placed athlete.

On 14 February, Darya Domracheva won the second gold medal in the 15km Individual, allowing one mistake on the second shoot and showing excellent speed at the distance.

Domracheva won her third gold medal of Sochi 2014 a few days later, turning on the power again in the Mass Start and making light of a miss at the final shoot to coast home 20 seconds clear of the second-placed athlete. On the same day, Belarus President Aleksandr Lukashenko signed a decree to award Darya Domracheva the title "Hero of Belarus."

Due to a bout of illness, the athlete skipped the 2015/2016 season. She took a break from sport in 2016 to give birth to baby daughter Xenia. She returned to sport on 6 January 2017 at the World Cup in Oberhof. At the 2017/2018 Biathlon World Cup, Domracheva won several victories, the last one was in the Mass Start in Antholz which was her career 30th. All in all, the biathlete has won 75 World Cup medals (30 gold, 21 silver, 24 bronze).

At the Winter Olympics in Pyeongchang in 2018, Darya Domracheva and her teammates Nadezhda Skardino, Iryna Kryuko, Dzinara Alimbekava won the Olympic gold in the 4x6km Relay. The winners of the relay were awarded the Order for Personal Gallantry by the decision of Belarus President Aleksandr Lukashenko.

Darya Domracheva also snatched a silver medal at the Olympic Games in Pyeongchang in the Mass Start.

Darya Domracheva is the world's first and only four-time Olympic champion in biathlon, the most decorated athlete in the history of sovereign Belarus.

In September 2018, she was awarded the Medal of Honor at the Congress of the International Biathlon Union (IBU).