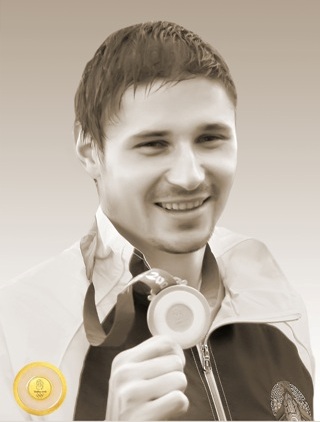 Aliaksandr Bahdanovich was born in the town of Yelizovo, Osipovichi District, Mogilev Region, on 29 April 1982. He took up sport quite early, because the mother of the future Olympic champion worked at a local glass factory as a physical education instructor. In 1995, a fellow villager and an employee of the canoe section of Bobruisk Olympic Reserve School invited Aliaksandr Bahdanovich and his mother to the canoe sprint competition of Mogilev Region. Canoing became his passion and at the age of 13, in 1995, the teenager enrolled at Bobruisk Olympic Reserve School. A few years later, his younger brother, Andrei Bahdanovich, followed in his footsteps.

Aliaksandr Bahdanovich teamed up with Aliaksandr Kurliandchyk for European and world championships, but at the 2004 Olympic Games their crew finished 6th and 10th in the C-2 500m and C-2 1,000m events, respectively.

In 2006, at the suggestion of coach Piotr Yanovsky, Aliaksandr Bahdanovich teamed up with his younger brother Andrei.

The first success was not long in coming. At one of the World Cup events, the brothers won a sensational victory. It became clear that the brothers would make excellent candidates for the 2008 Olympics in Beijing. On the way to the Olympic Games the Bahdanovich brothers won the European championships in 2007 and 2008. Hard work and persistence bore fruit. At the 2008 Olympic Games in Beijing the brothers stunned the audience with a sprint dash at the finish line, which later became their signature finishing style. The Bahdanovich brothers strictly followed the coach’s instructions, i.e. to keep their rivals in check throughout the first 750 meters and not to let them pull away too far and then to spurt into the lead. Andrei and Aliaksandr Bahdanovich upset defending Olympic champion Germany to win a thrilling race in 3:36.365, 0.223 seconds ahead of Christian Gille and Thomasz Wylenzek.

In 2008 Aliaksandr Bahdanovich graduated from the Belarusian State University of Physical Culture. The Olympic Games were followed by a large number of European and world championships, where the brothers more than once proved their superiority over rivals.

The 2012 Summer Olympic Games in London were another milestone in their career as they added silver in the C-2 1,000m event to their impressive medal tally.

Despite their successful performance at the Canoe Sprint European Championships in Serbia and the 1st European Games in Baku, the brothers were deprived of a chance to win another Olympic medal. The entire team was banned from participating in the 2016 Olympic Games in Rio de Janeiro due to suspicion of doping, but was later fully acquitted.

In 2016, after 20 years in sport, Aliaksandr Bahdanovich retired and went into politics.

On 11 September 2016 he won a seat in the House of Representatives of the National Assembly to represent Osipovichi District in the lower house of the parliament.