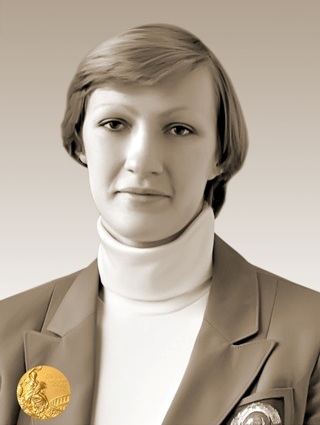 Bronze, Spartakiad of the Peoples of the USSR, 1983

Tatyana Beloshapko was born in Vitebsk on 27 March 1958. Back in the third grade, inspired by her elder brother and sister, the girl decided to take up basketball. Coaches Arkady and Lyudmila Gusevs were happy to see her in the basketball team of Sports School No. 4 of Vitebsk, because she was already taller than her peers. She stood out for her physique, excellent technique and a strong will. Tatyana quickly took the lead in the teams where she played.

In 1972 she got an offer to play for the Minsk-based Horizont team. That was the beginning of her brilliant career. The first significant success came at the All-Union Youth Games that took place in Vilnius in 1973. The talented girl was then noticed by the coaches of the country's national junior team. Thus, at the age of 15, she joined the team where almost all the players were three years older than her.

With this team, Tatyana won her first gold at the European Championship held in Italy. Due to this she got the master of sports title at the age of 15. The athlete joined the Horizont club in 1973. That was a really momentous year for her career. She stayed with the team coached by Semyon Khalipsky for several years.

In 1979, the team debuted in the A-League, while Tatyana received an invitation to join the USSR national team. The invitation came after she was named the best power forward at one of the championship rounds.

The Soviet team was heavily favored to win at the Moscow Olympics. Indeed, the team was brilliant, and the main rival – Team USA – boycotted the Games. The Soviet team lived up to the expectations. The 22-year-old Belarusian was among those gracing the podium.

In addition to numerous victories at the international level, Tatyana was also proud of the success of the Belarusian national team at the Spartakiad of the Peoples of the USSR where Belarus was a third-place finisher, while Latvia and Leningrad took gold and silver.

Ahead were the Los Angeles Olympic Games. Tatyana invested a great deal of effort in preparations, but on 8 May the basketball players were told that the Soviet Union would not take part in the Games. The team was told to get ready for the Friendship Games that were due in Moscow in 1984. At these games Tatyana won a well-deserved gold and a champion title again.

In the early 1990s, due to numerous injuries, Tatyana Beloshapko retired from sport and started coaching. She has been doing it till this very day.