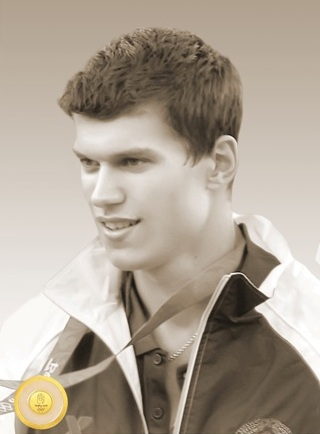 Merited Master of Sports of The Republic of Belarus

Artur Litvinchuk was born on 4 January 1988 in Mazyr, Gomel Region. At the age of 19, Arthur won two distances at the local competitions in Brest, where Vladimir Shantarovich, an experienced coach of the national team, drew attention to Litvinchuk. Before the World Championship in Duisburg, where the Olympic licenses were played out, a young athlete was included in the kayak- four (K4), along with other athletes he took fourth place and received a pass to the main start of the four-year period.

August, 22 2008 was a happy day for Belarusian sport. On this day at the XXIX Summer Olympics in Beijing were held competitions canoe and kayak. Canoe sprint brothers Andrei and Aliaksandr Bahdanovich won the gold medal at a distance of 1000 meters. And literally 20 minutes after the finish of the two brothers, the four Belarusian canoeists Raman Piatrushenka, Vadzim Makhneu, Aliaksei Abalmasau and Artur Litvinchuk triumphantly finished the 1000 meters race in kayak with the total result of 2 minutes 0.986 seconds and beat the second quarter of athletes from Slovakia by 0.879 seconds. The third place was taken by kayakers from Germany.

The following year, the same "golden" four won the 1000 meters distance at the World Championships that was held in Halifax (Canada).

Soon after that Arthur Litvinchuk retired from the competitive sports. In 2012 he married Marina Poltoran, another Belarusian rower. Their first son was born in January 2018.