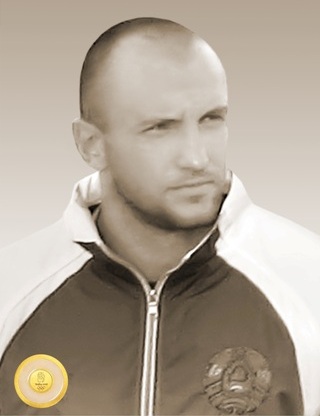 Honored master of sports of the Republic of Belarus.

Honorary citizen of the city of Borisov

Aliaksei Abalmasau was born in Taganrog (Russia) on June 20 in 1980; later on, he moved to Borisov (Belarus) and started actively rowing at the age of 13. Sports training took place in the Minsk regional specialized children and youth school of the Olympic reserve and in the Republican center of the Olympic preparation. Aleksey was a member of the sports club of internal troops of the Ministry of internal Affairs of the Republic of Belarus. As a member of the voluntary sports society "Dynamo", trained with such specialists as V. Bykov and D. M. Goshko.

Having amazing working capacity in juniors, he declared himself as an ambitious single winning bronze at the World Cup in Poland. However, the real success Aliaksei Abalmasau managed to achieve in the crew-four.

The first major achievement of Aliaksei Abalmasau at the adult international level was two bronze medals in 2001 at the European championship in Milan in a four-seater crew at distances of 500 and 1000 meters. A year later, at the world Championships in Seville in Spain he won the silver medal in coxed four race. In 2004, ALIAKSEI ABALMASAU won silver at the European championship in Poznan (Poland). Due to series of successful performances, Aliaksei was awarded to defend the honor of the country at the summer Olympic Games in Athens-2004 as part of the crew of the kayak-four. Together with teammates Raman Piatrushenka, Vadzim Makhneu and Demyan Turchin reached the final stage of the 1000 m program. However, in the decisive race the crew finished only sixth.

Become an Olympic champion, Aliaksei Abalmasau remained in the main part of the Belarusian national team and continued to participate in the largest international regattas. In 2009, he made a gold double: in the 1000 m, standings K-4 he won gold at the European championship in Brandenburg and at the World Championships in Dartmouth. The following year he added to the record of accomplishment a silver medal at the World Championships in Poznan in kayak-four on 1000 m. In 2011 Aliaksei Abalmasau successfully performed at the World Cup, hoping for Olympic Games in London 2012. However, Belarus has not received an Olympic license in the kayak-four program, after it, Aliaksei Abalmasau finished career of the professional athlete.

Aliaksei Abalmasau graduated from the international humanitarian economic Institute. At the Belarusian State University of Physical Culture, he studied at the Department of water-technical sports. After completing his sports career, he continued to serve in the internal troops of the Ministry of internal Affairs of Belarus as a senior Lieutenant, and then he switched to coaching.