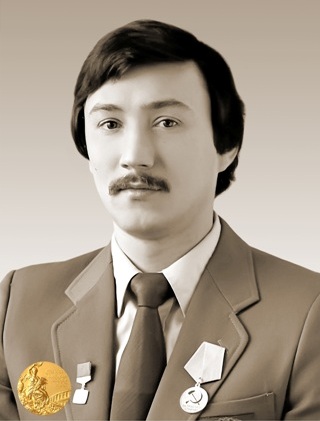 Honored master of sports of the USSR.

The champion of the XXII Summer Olympiad in Moscow in 1980 in the team competition (fencing, sabre).

Silver medalist of the World Сhampionship in 1981 (Clermont-Ferrand) in the team competition.

Bronze medalist of the USSR Сhampionship in 1980 in the individual competition.

The winner of the European Cup in the individual competition.

Nikolay Alekhin was born on October 26, 1954 in Minsk. He joined the section of fencing in his native town Masyukovschina, because there was no other sport club in the town. Alexander Romankov, the future Olympic champion, together with Nikolay got to their trainer Ernest Asievsky. Nikolay tried all kinds of weapons, but gave his preference to a foil. In 1966, the team of Minsk district was preparing for the Republican Spartakiad for schoolchildren. There were three fencers with foil for two places, but there was only one sabre-fencer. The coach appointed Alekhin to this place. At his first sabre competitions Nikolay Alekhin became a silver medalist.

In 1974, Nikolay became a candidate for the national team of the Soviet Union. In 1975, the Belarusian saber-fencer took third place at the Spartakiad of the Peoples of the USSR. Three years later he was included in the Soviet national team.

Silver medal in the team competition of the VII Summer Spartakiad of the Peoples of the USSR gave him an opportunity to take part in the World Championship in Melbourne. In 1979 in Australia it was Nikolay’s debut at an adult international competition. The debutant of the team in the individual championship was in the top six, although could have won a bronze medal, but lost only one shot.

The final fifth place was a significant application for the Olympiad in Moscow. Besides, the Soviet fencers became winners at the World Championship in the overall team score. In 1979, Alekhin won a gold medal at the World University Games.

Have finished his sports career, Nikolay Alekhin coached the national team of the BSSR in sabre fencing.