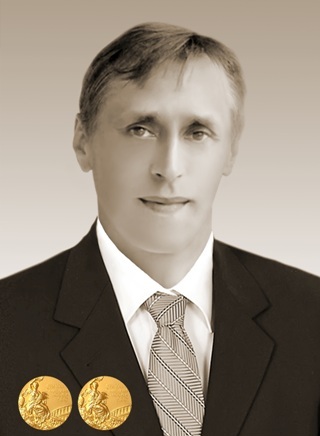 Holder of the world record in 200m freestyle

Order of the Red Banner of Labor

Winner of the Spartakiad of the Peoples of the USSR, 1979

Sergey Koplyakov was born on 23 January 1959 in Orsha, Vitebsk Region. He took up swimming to overcome the fear of water after a near-drowning incident.

After such a success, Moscow and Leningrad swimming schools took notice of Sergey Koplyakov. As a member of the USSR national team, Sergei Koplyakov moved to Leningrad where he began training with coach Genrikh Yarotsky.

Four years later, at the Summer Olympic Games in Moscow, the Soviet relay team, with Sergey Koplyakov on the roster, won gold in the 4x200m freestyle and silver in the 4x100m medley. The Belarusian swimmer also won gold in the 200m freestyle, hitting a new world record he set a year earlier. At the USSR vs GDR competition in 1979 Sergey Koplyakov set a world record of 1:49.83 in the 200m freestyle. A year later, at the Olympic Games, he beat his record, finishing in 1:49.81.

Despite his outstanding success at the Olympics, Sergey Koplyakov retired from sport very early, at the age of 23. The Olympic champion became head coach of the Olympic Training Center in Minsk. He currently resides in St. Petersburg.