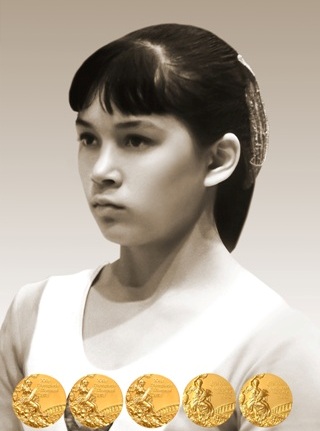 Honored Master of Sports of the USSR, 1976

Two Orders of the Red Banner of Labor

Inductee of the International Gymnastics Hall of Fame in Oklahoma, USA

President of the Women's Technical Committee of the International Gymnastics Federation, 2004

(Before she moved to the BSSR)

Two-time champion of the Olympic Games in Moscow, 1980 (team, floor)

Nelli Kim was born on 29 July 1957 in the village of Shurab, Leninabad Region, Tajikistan. Shortly after Nelli was born her family moved to Chimkent, southern Kazakhstan. At the age of 10, she joined the Chimkent City Children’s and Youth Sports School to train under the tutelage of coach Vladimir Baidin. After three years of training, Nelli Kim became Candidate Master of Sports. At the age of 14, Nelli Kim placed fifth at the 1971 Junior USSR Championships where she was noticed by experts from the national team.

Nelli Kim was one of the world’s best gymnasts throughout the 1970s, competing alongside with such outstanding Soviet gymnasts as Lyudmila Turishcheva and Olga Korbut. In 1975, the athlete from Chimkent won the all-around gold at the Spartakiad of the Peoples of the USSR in Leningrad and became the European champion in the floor exercise.

Romania’s Nadia Comaneci was the main rival of the Soviet gymnasts at the 1976 Summer Olympics in Montreal, Canada. Nelli Kim was the only one who could rival her. Despite the fact that the Romanian athlete won five medals at those games, three of which were gold (all-around, uneven bars and balance beam), the Soviet athlete from Kazakhstan claimed victories in the floor and vault events to receive a record ten points from the judges. Thanks to Nelli Kim, the USSR beat Romania in the team final. The gymnast from Kazakhstan won gold medals at the Olympics three times.

In 1977, Nelli Kim married Belarusian gymnast Vladimir Achasov and moved to Minsk where she began training with famous coach Nikolai Miligulo and represent the Byelorussian SSR. In 1979, the athlete became the world all-around champion. At the 1980 Summer Olympic Games in Moscow, the USSR women's gymnastics national team claimed gold in the team final, and Nelli Kim clinched the champion title in the floor exercise.

Nelli Kim was the first gymnast in the history of the Olympic Games to receive the maximum 10 points for the floor exercise and the vault.

In 1980, Nelli Kim retired from sport and coached various national gymnastics teams (Republic of Korea, Italy, Belarus). She became an international referee and judged all major competitions: the Olympic Games, World and European Championships. In October 2004, at the Congress of the International Gymnastics Federation (FIG), Nelli Kim was elected President of the Women's Artistic Gymnastics Technical Committee and coordinated the introduction of new rules in women's gymnastics.

In 2012 she defended her thesis for the degree of Candidate of Pedagogical Sciences in Lesgaft National State University of Physical Education, Sport and Health (St. Petersburg) at the Department of Theory and Methodology of Gymnastics. In 2016, Nelli Kim was elected Vice President of the International Gymnastics Federation (FIG).