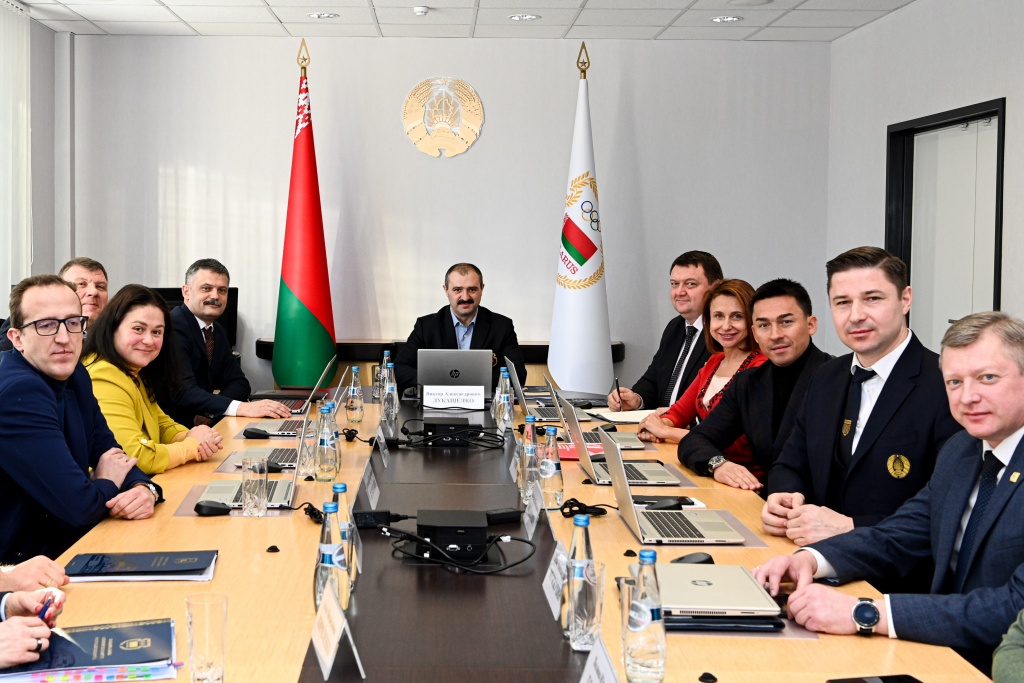 On 29 December, the NOC Executive Board gathered for a meeting at the headquarters of the National Olympic Committee of the Republic of Belarus to sum up the results for 2021.

The members of the Executive Board heard a report of President of the NOC of Belarus Viktor Lukashenko.

The main event of the outgoing year was the Games of the XXXII Olympiad in Tokyo. The event was postponed due to the coronavirus pandemic to 2021. A reminder, Belarus won 7 awards: 1 gold, 3 silver and 3 bronze medals in Tokyo last summer. The gold was claimed by Ivan Litvinovich (trampoline gymnastics).

Preparations for the XXIV Winter Olympic Games in Beijing are also in the home stretch. The NOC of Belarus has maintained close cooperation with national sports federations providing all the information necessary for preparation for the Games in a timely manner. Close cooperation has been established with the Organizing Committee. All potential participants of the Olympiad, which will be held in the capital of China from 4 to 20 February 2022, have been pre-accredited.

Team Belarus performed well at the XV European Youth Olympic Festival (EYOF) in Vuokatti. Due to the coronavirus pandemic, the festival was also postponed from February 2021 to March 2022. However, the hockey tournament, due to the tight calendar in this sport, was held in December of this year. Belarus’ U18 team placed second in this tournament. The main part of the festival will be held on 20-25 March 2022. About 2,000 athletes from 47 countries will compete in nine sports. The EYOF program includes alpine skiing, biathlon, ice hockey, snowboarding, cross-country skiing, ski jumping, short track, figure skating and Nordic combined.

One of the 2021 most important events for the NOC was the Olympic meeting held with the participation of Belarusian President Aleksandr Lukashenko on 26 February. The meeting considered a number of issues of statutory activities of the NOC of Belarus and its membership. The meeting approved a new version of the Charter, which was drawn up taking into account the recommendations of the International Olympic Committee, considered the quantitative membership of the NOC and the NOC Executive Board and elected their members. The NOC president and vice-president were elected. Viktor Lukashenko was elected NOC President to become the third head of the National Olympic Committee of Belarus.

In 2021 the NOC of Belarus marked its 30th anniversary. A number of projects were successfully implemented to celebrate the event. Team BY 2020 Tokyo Olympics outfit was unveiled on 22 March, the foundation day of the National Olympic Committee of the Republic of Belarus.

The photo exhibition “National Olympic Committee of Belarus: 30 years. The stories of our victories!” was another event to mark the anniversary. The exhibition features photos of the momentous events for the NOC of Belarus over the past 30 years and also photos of champions and medalists of the Olympic Games that independent Belarus took part in. The Rules of Life of the Belarusian Athletes project continues. The first issue of the TEAM BY magazine has come out in cooperation with the Belarus Segodnya Publishing House.

The NOC interior exposition (partly the fourth floor) was expanded and upgraded to drum up the interest in the exhibition “History of the Olympic Movement in the Republic of elarus” and increase its capacity.

A number of methodological events were also organized this year. Belarus’ first National Athletes Forum was held on 23 April 2021. The event was a joint project of the Athletes' Commission of the NOC of Belarus and the Russian International Olympic University (RIOU). The joint work of the NOC of Belarus and the RIOU continued throughout 2021. Some 24 specialists from Belarus were trained at the university branches in Sochi and Moscow, both in full-time and distance formats.

On 2 July 2021 Belarus’ NOC headquarters hosted the educational seminar Work of the Press Service of the Sport Organization: Modern Areas and Trends. Attending the seminar were 30 sports organizations.

One of the NOC’s most important activities in 2021 was international cooperation. In March the NOC leadership paid a visit to the Russian Olympic Committee.

The NOC delegation paid a working visit to the Kingdom of Bahrain in July 2021 and attended a regional forum of the heads of national Olympic committees of the CIS countries, the Baltic states and Georgia in Tashkent in November.

The NOC of Belarus continued its cooperation with the IOC Olympic Solidarity under the programs of support for young athletes and a number of Olympic educational projects. The National Olympic Committee has continuously supported sports federations in organizing important international events in Belarus.

At the end of the year, the NOC of Belarus, together with the Informatization and Communications Ministry, issued commemorative stamps to celebrate Tokyo 2020 Olympics medalists.

An official event to mark the anniversary of the NOC of Belarus took place at the Falcon Club Arena on 10 December 2021. Taking part in the ceremony were Olympic champions and medalists, distinguished Belarusian athletes and coaches, members of the NOC of Belarus, honored workers of physical education and sports, veterans of the Olympic movement, workers of the sports industry and other stakeholders.

The NOC of Belarus has always paid special attention to the younger generation and veterans of sports. The traditional Olympic Christmas Tree event organized by the National Olympic Committee for children of famous athletes took place in late December.

On 29 December the Executive Board of the National Olympic Committee of the Republic of Belarus also summed up the performance of the NOC's standing commissions in 2021 and approved the action plan for 2022.

Press department of the NOC Belarus