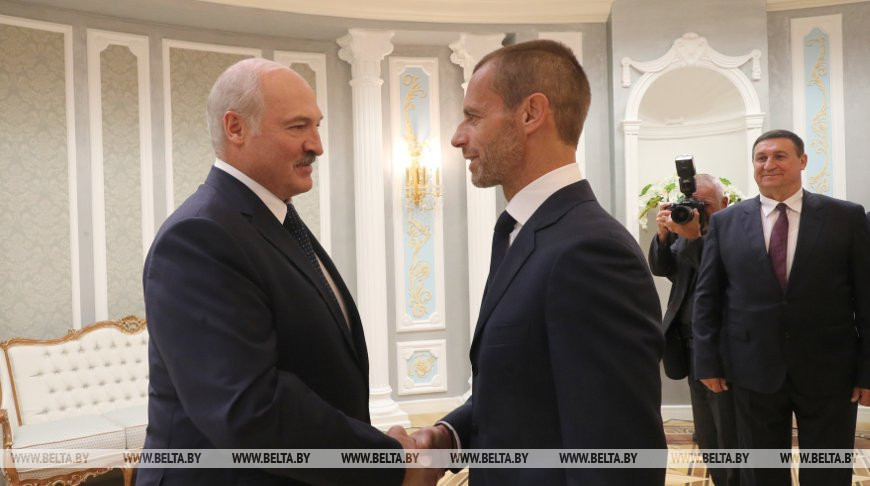 Belarus is ready to host sports competitions of any level, including the UEFA Super Cup, Belarus President Aleksandr Lukashenko said as he met with President of the Union of European Football Associations (UEFA) Aleksander Ceferin who is in Belarus on a visit.

The Belarusian president stressed that the discussion of the 2022 UEFA Super Cup is currently in progress, and if Minsk will be chosen as the host city, Belarus will do its best to host the event at the highest level.

Aleksandr Lukashenko thanked UEFA for assistance in the popularization of football in Belarus. “We hope that your election as the president of the union will help enhance our relations and contacts, will ensure mutual understanding in all areas. However, I cannot say that we had any problems in the past,” the head of state said.

“UEFA has always responded to our requests and always helped us, especially in the development of children's sport. The union has never criticized for the non-targeted use of funds, for not helping children and not supporting football,” the Belarusian president continued.

Aleksandr Lukashenko assured that Belarus will continue doing it in the future.

The president added that Belarus has never hosted big football events. “Therefore, if the Union of European Football Associations will consider the option, please remember that our country is ready to host continental competitions of any level.”

According to the head of state, it is a pleasure for him to meet with Aleksander Ceferin who is representing his favorite sport.

Slovenian football functionary Aleksander Ceferin became UEFA president in 2016. He was re-elected in February 2019 for a new four-year term. One of the priorities in his presidential agenda is the active investment in the development of grassroots and women's football.

Belarus cooperates with UEFA through the Belarusian Football Federation which has been a member of the union since 1993.

In 2019, Minsk hosted the UEFA Grassroots Conference for the first time. Partaking in the event were about 200 people from 55 European countries.

Republican Drawing Contest 2020: “The Olympic Flame lights the Hearts” is announced by the NOC Belarus
© National Olympic Committee of the Republic of Belarus, 2011 - 2020
Website development - ArtisMedia